For Prelims and Mains: Paika Rebellion- what when and why?

Context: The government is planning to release the commemorative coin and postage stamp in memory of Paika Rebellion.

Two-hundred years ago in 1817, a valiant uprising of soldiers led by Buxi Jagabandhu (Bidyadhar Mohapatra) took place in Khurda of Odisha. This is known as Paika rebellion.

Reason for the revolt:

CDSCO has directed Drug Controllers of all the States and Union Territories to monitor the sale, manufacture and distribution of Isotretinoin.

It was later found that Isotretinoin can cause birth defects in progeny if not taken without proper guidance.

Functions: Under the Drugs and Cosmetics Act, CDSCO is responsible for approval of New Drugs, Conduct of Clinical Trials, laying down the standards for Drugs, control over the quality of imported Drugs in the country and coordination of the activities of State Drug Control Organizations by providing expert advice with a view to bring about the uniformity in the enforcement of the Drugs and Cosmetics Act.

CDSCO along with state regulators, is jointly responsible for grant of licenses of certain specialized categories of critical Drugs such as blood and blood products, I. V. Fluids, Vaccine and Sera.

Mains Question: It is said that India is becoming home to production and trial of substandard drugs in recent years. In your opinion, why such drugs are produced and distributed? How can they be regulated? Critically comment.

Context: The Ministry of Home Affairs (MHA) has issued an order authorising ten security and intelligence agencies of the country to access any information stored in any computer for the purpose of monitoring, decrypting and interception.

Who are these agencies?

Highlights of the Order:

Only data in motion could be intercepted earlier. But now data revived, stored and generated can also be intercepted as powers of seizure have been given. This means not just calls or emails, but any data found on a computer can be intercepted. The agencies will also have powers to seize the devices. The sweeping powers given to agencies to snoop phone calls and computers without any checks and balances is extremely worrisome. This is likely to be misused.

Context: The government has sought Parliament’s approval for supplementary grants worth ₹41,000 crore to infuse fresh capital into ailing state-run banks in the current fiscal.

The additional capital could help as many as five such state-run banks exit the prompt corrective action (PCA) frameworkthat mandates them to pare lending to companies and cut concentration of loans to certain sectors. Eleven banks were put under the PCA framework by the Reserve Bank of India between February 2014 and January 2018.

The capital infusion will be utilized to ensure that the better-performing banks under the PCA framework meet their regulatory capital norms and non-PCA banks do not breach the threshold.

Concerns associated with recapitalization of banks:

PSBs are in very real danger of losing not only their market share but also their identity unless the government intervenes with surgical precision and alacrity. Hence, policymakers and bankers need to put their heads together and come up with a smart option to resolve an issue that can no longer be put on the backburner.

Mains Question: In the wake of the current Indian banking system crisis, discuss what measures should be taken by the government to prevent such incidents in the future.

For Prelims and Mains: ATAGS- key features and significance. 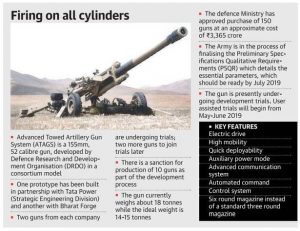 NASA Confirms Saturns Rings Will Be Gone in 100 Million Years

Context: New NASA research confirms that Saturn is losing its iconic rings at the maximum rate estimated from Voyager 1 & 2 observations made decades ago.

The rings are being pulled into Saturn by gravity as a dusty rain of ice particles under the influence of Saturn’s magnetic field.

Saturn’s rings are made up of billions of particles ranging from grains of sand to mountain-size chunks. Composed predominantly of water-ice, the rings also draw in rocky meteoroids as they travel through space.

Is it only the Saturn to have rings?

Saturn is not the only planet in the solar system to have rings — Jupiter, Uranus and Neptune also contain faint ring systems — but with its satellites spanning three-quarters of the Earth-moon distance (175,000 miles or 282,000 km), it is by far the largest and most visible.

For Prelims and Mains: NSM- objectives, significance and challenges ahead.

The Mission envisages empowering national academic and R&D institutions spread over the country by installing a vast supercomputing grid comprising of more than 70 high-performance computing facilities.

Over the years, supercomputers have benefitted mankind in several ways. Weather prediction has reached accuracy of forecast as well as real time tracking of natural phenomenon. Timely warning of cyclones in the recent past have saved many lives and property. The Mission aims to further such capabilities beyond current levels.

Context: The Union Government has announced to confer the Prime Minister’s Shram Awards 2017 to 40 workers across country.

The Prime Minister’s Shram Awards were instituted in 1985 by the Government of India.

This national award is conferred on workers for outstanding contributions that improve productivity, innovation, and indigenization, resulting in saving foreign exchange. The award is also given for long-term exceptional dedicated work.

The objective of the Prime Ministers Shram Awards is to recognize the outstanding contributions made by workmen as defined in the Industrial Dispute Act, 1947 in organizations both in public and private sector and who have distinguished record of performance, devotion to duty of a high order, specific contribution in the field of productivity and proven innovative abilities among others.

There are four types of awards: