For Prelims and Mains: TDSAT- composition, objectives, functions and powers.

In order to bring in functional clarity and strengthen the regulatory framework and the disputes settlement mechanism in the telecommunication sector, the TRAI Act of 1997 was amended in the year 2000 and TDSAT was set up to adjudicate disputes and dispose of appeals with a view to protect the interests of service providers and consumers of the telecom sector.

In January 2004, the Government included broadcasting and cable services also within the purview of TRAI Act. The jurisdiction of TDSAT stands extended to matters that lay before the Cyber Appellate Tribunal and also the Airport Economic Regulatory Authority Appellate Tribunal.

The Tribunal consists of a Chairperson and two Members appointed by the Central Government.

For Prelims and Mains: Highlights of the Bill and key functions of the National Dam Safety Authority, concerns expressed by states over the Bill.

Context: The government has introduced the Dam Safety Bill in the Lok Sabha, a legislation that aims to provide a robust legal and institutional framework under Central and state governments for the safety of dams, which will help states and Union territories adopt uniform procedures to ensure safety of reservoirs.

Why Centre is introducing this Bill?

Though the subject does not fall under the purview of Parliament, the Centre has decided to introduce this bill mainly because dam safety is an issue of concern in the country. And there are no legal and institutional safeguards in this regard.

The Bill provides for proper surveillance, inspection, operation and maintenance of all specified dams in the country to ensure their safe functioning.

Over the last fifty years, India has invested substantially in dams and related infrastructures, and ranks third after USA and China in the number of large dams. 5254 large dams are in operation in the country currently and another 447 are under construction. In addition to this, there are thousands of medium and small dams.

Mains Question: Discuss the provisions of the Dam Safety Bill 2018 and the role of National Dam Safety Authority. Critically examine how far the Bill goes in ensuring structural and operational safety of dams?

For Prelims and Mains: Partners’ Forum- objectives, composition and significance.

Context: The fourth Partners’ Forum was recently held in New Delhi. It was hosted by the Government of India, in association with the Partnership for Maternal, Newborn and Child Health (PMNCH).

What is Partners’ Forum?

An alliance: This partnership is an alliance of more than 1,000 plus members, across 10 constituencies in 92 countries: academic, research and teaching institutions; donors and foundations; health care professionals; multilateral agencies; non-governmental organizations; partner countries; global financing mechanisms and the private sector.

The programme of the Partners’ Forum will be framed around the objectives of the Global Strategy of Survive – Thrive – Transform.

The Shyama Prasad Mukherji Rurban Mission (SPMRM) is under implementation across the country (launched in 2016).

It is a unique programme, designed to deliver catalytic interventions to rural areas on the threshold of growth.

There is a funding support of up to 30% of the estimated investment for each Rurban cluster, given as Critical Gap Funding (CGF), while 70% of the funds is mobilized by the States through convergence with synergic State and Central programmes and private investment and institutional funding.

The CGF is now shared between the Centre and the State in a ratio of 60:40 for Plain area States and 90:10 for Himalayan and NE States.

As per Census of India Statistics, the rural population in India stands at 833 million, constituting almost 68% of the total population.

The rural population has shown a growth of 12% during the 2001-2011 period and there has been an increase in the absolute number of villages during the same period.

Large parts of rural areas are not stand-alone settlements but part of a cluster of settlements, which are relatively proximate to each other. These clusters typically illustrate potential for growth, have economic drivers and derive location and competitive advantages.

Hence, making a case for concerted policy directives for such clusters; these clusters once developed can then be classified as ‘Rurban’.

The National Mission on GeM (NMG) was launched on 5th September 2018 to accelerate the adoption and use of Procurement by Major Central Ministries, States and UTs and their agencies (including CPSUs/PSUs, Local Bodies) on the GeM platform.

Objectives of the NMG:

GeM is a short form of one stop Government e-Market Place hosted by Directorate General of Supplies and Disposals (DGS&D) where common user goods and services can be procured.

GeM has recorded about $1.5 billion worth of transactions since it was launch 18 months ago.

Context: The Central Ground Water Authority of the Union Ministry of Water Resources, River Development and Ganga Rejuvenation on December 12, 2018 notified revised guidelines for ground water extraction. The revised guidelines, which will be effective from June 1, 2019, aim to ensure a more robust ground water regulatory mechanism in the country.

The revised guidelines provide for the:

Exemptions under the revised guidelines:

One of the important features of the revised guidelines is the introduction of the concept of Water Conservation Fee (WCF), the fee charged on extraction of ground water.

In India, extracted groundwater is mainly used for irrigation and accounts for about 228 BCM (billion cubic metre) — or about 90% of the annual groundwater extraction. The rest, 25 BCM, is drawn for drinking, domestic and industrial uses.

Mains Question: India’s overexploitation of groundwater is leading to the worst water crisis in its history. Examine and suggest measures for improvement.

For Prelims and Mains: ALMA- objectives, significance and accomplishments. 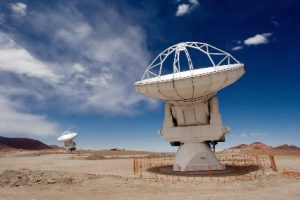 Significance of these observations:

The Atacama Large Millimeter/submillimeter Array (ALMA) is an international partnership of the European Southern Observatory (ESO), the U.S. National Science Foundation (NSF) and the National Institutes of Natural Sciences (NINS) of Japan, together with NRC (Canada), NSC and ASIAA (Taiwan), and KASI (Republic of Korea), in cooperation with the Republic of Chile.

For Prelims and Mains: Features, objectives and significance of ICESat- 2, melting of ice- reasons and concerns.

Context: NASA’s ICESat-2 — launched less than three months ago — has mapped melting ice sheets in Antarctica and the resulting sea level rise across the globe, which could help improve climate forecasts.

As the name suggests, ICESat-2 is a follow-on project. The original spacecraft flew in the 2000s and pioneered the laser measurement of the height of polar glaciers and sea-ice from space. But the mission was plagued by technical problems that limited its observations to just a couple of months in every year.

Why is this mission important?

Antarctica and Greenland lose billions of tonnes of ice every year – the result largely of warm water being able to melt land glaciers where they meet the ocean. This wastage is slowly but surely pushing up sea-levels worldwide.

Mains Question: Discuss the factors that are aggravating melting of ice in the Arctic and other ice regions. In your opinion, what kind of response is needed to deal with climate change consequences?